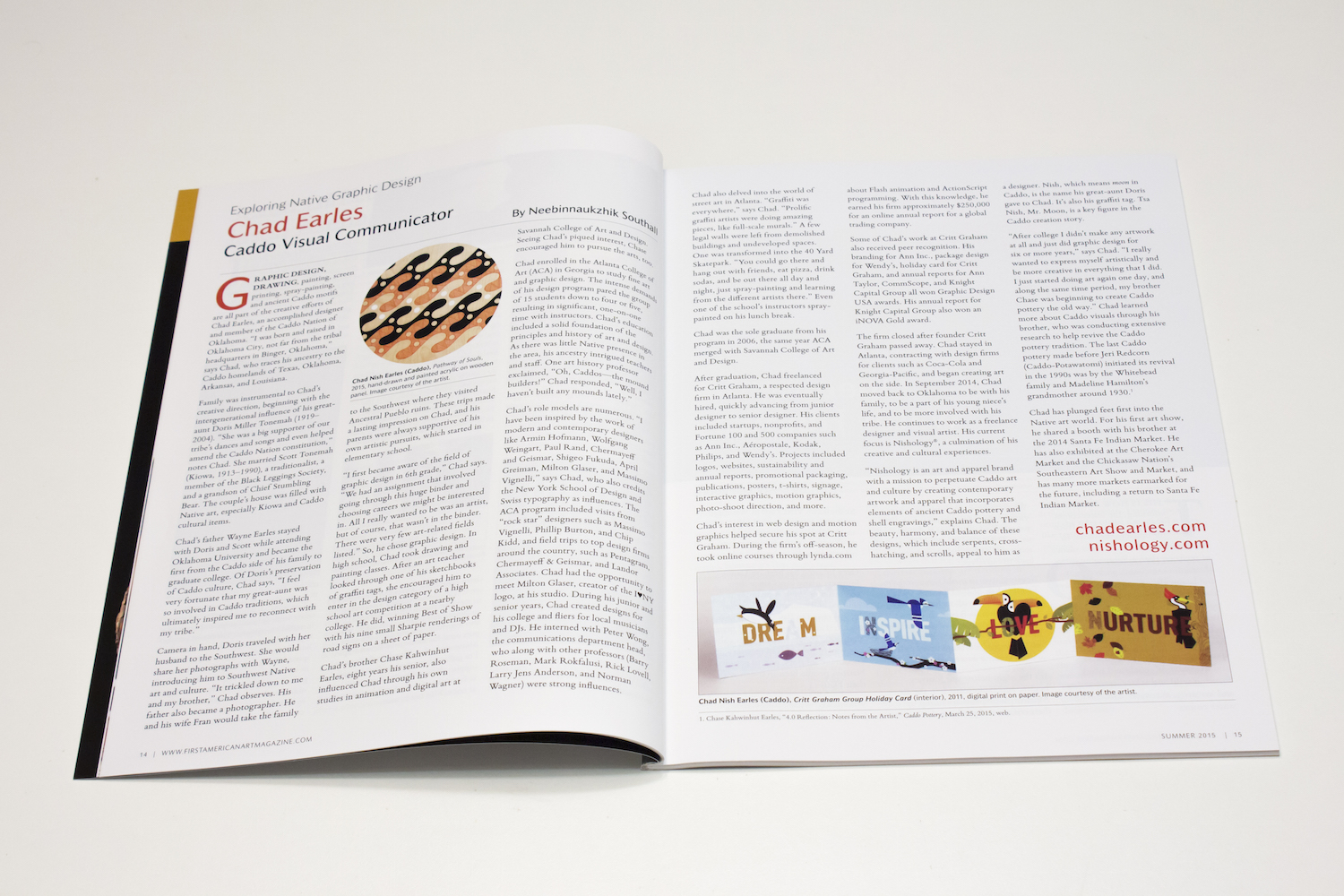 GRAPHIC DESIGN, DRAWING, painting, screen printing, spray-painting, and ancient Caddo motifs are all part of the creative efforts of Chad Earles, an accomplished designer and member of the Caddo Nation of Oklahoma. “I was born and raised in Oklahoma City, not far from the tribal headquarters in Binger, Oklahoma,” says Chad, who traces his ancestry to the Caddo homelands of Texas, Oklahoma, Arkansas, and Louisiana.

Family was instrumental to Chad’s creative direction, beginning with the intergenerational influence of his great- aunt Doris Miller Tonemah (1919– 2004). “She was a big supporter of our tribe’s dances and songs and even helped amend the Caddo Nation constitution,” notes Chad. She married Scott Tonemah (Kiowa, 1913–1990), a traditionalist, a member of the Black Leggings Society, and a grandson of Chief Stumbling Bear. The couple’s house was filled with Native art, especially Kiowa and Caddo cultural items.

Chad’s father Wayne Earles stayed with Doris and Scott while attending Oklahoma University and became the first from the Caddo side of his family to graduate college. Of Doris’s preservation of Caddo culture, Chad says, “I feel very fortunate that my great-aunt was
so involved in Caddo traditions, which ultimately inspired me to reconnect with my tribe.”

Camera in hand, Doris traveled with her husband to the Southwest. She would share her photographs with Wayne, introducing him to Southwest Native art and culture. “It trickled down to me and my brother,” Chad observes. His father also became a photographer. He and his wife Fran would take the family to the Southwest where they visited Ancestral Pueblo ruins. These trips made a lasting impression on Chad, and his parents were always supportive of his own artistic pursuits, which started in elementary school.

“I first became aware of the field of graphic design in 6th grade,” Chad says. “We had an assignment that involved going through this huge binder and choosing careers we might be interested in. All I really wanted to be was an artist, but of course, that wasn’t in the binder. There were very few art-related fields listed.” So, he chose graphic design. In high school, Chad took drawing and painting classes. After an art teacher looked through one of his sketchbooks of graffiti tags, she encouraged him to enter in the design category of a high school art competition at a nearby college. He did, winning Best of Show with his nine small Sharpie renderings of road signs on a sheet of paper.

Chad’s brother Chase Kahwinhut Earles, eight years his senior, also influenced Chad through his own studies in animation and digital art at Savannah College of Art and Design. Seeing Chad’s piqued interest, Chase encouraged him to pursue the arts, too.

Chad enrolled in the Atlanta College of Art (ACA) in Georgia to study fine art and graphic design. The intense demands of his design program pared the group of 15 students down to four or five, resulting in significant, one-on-one time with instructors. Chad’s education included a solid foundation of the principles and history of art and design. As there was little Native presence in the area, his ancestry intrigued teachers and staff. One art history professor exclaimed, “Oh, Caddos—the mound builders!” Chad responded, “Well, I haven’t built any mounds lately.”

Chad’s role models are numerous. “I have been inspired by the work of modern and contemporary designers like Armin Hofmann, Wolfgang Weingart, Paul Rand, Chermayeff
and Geismar, Shigeo Fukuda, April Greiman, Milton Glaser, and Massimo Vignelli,” says Chad, who also credits the New York School of Design and Swiss typography as influences. The ACA program included visits from “rock star” designers such as Massimo Vignelli, Phillip Burton, and Chip Kidd, and field trips to top design firms around the country, such as Pentagram, Chermayeff & Geismar, and Landor Associates. Chad had the opportunity to meet Milton Glaser, creator of the I♥NY logo, at his studio. During his junior and senior years, Chad created designs for his college and fliers for local musicians and DJs. He interned with Peter Wong, the communications department head, who along with other professors (Barry Roseman, Mark Rokfalusi, Rick Lovell, Larry Jens Anderson, and Norman Wagner) were strong influences.

Chad also delved into the world of street art in Atlanta. “Graffiti was everywhere,” says Chad. “Prolific graffiti artists were doing amazing pieces, like full-scale murals.” A few legal walls were left from demolished buildings and undeveloped spaces. One was transformed into the 40 Yard Skatepark. “You could go there and hang out with friends, eat pizza, drink sodas, and be out there all day and night, just spray-painting and learning from the different artists there.” Even one of the school’s instructors spray- painted on his lunch break.

Chad was the sole graduate from his program in 2006, the same year ACA merged with Savannah College of Art and Design.

Chad’s interest in web design and motion graphics helped secure his spot at Critt Graham. During the firm’s off-season, he took online courses through lynda.com about Flash animation and ActionScript programming. With this knowledge, he earned his firm approximately $250,000 for an online annual report for a global trading company.

The firm closed after founder Critt Graham passed away. Chad stayed in Atlanta, contracting with design firms for clients such as Coca-Cola and Georgia-Pacific, and began creating art on the side. In September 2014, Chad moved back to Oklahoma to be with his family, to be a part of his young niece’s life, and to be more involved with his tribe. He continues to work as a freelance designer and visual artist. His current focus is Nishology®, a culmination of his creative and cultural experiences.

“Nishology is an art and apparel brand with a mission to perpetuate Caddo art and culture by creating contemporary artwork and apparel that incorporates elements of ancient Caddo pottery and shell engravings,” explains Chad. The beauty, harmony, and balance of these designs, which include serpents, cross- hatching, and scrolls, appeal to him as a designer. Nish, which means moon in Caddo, is the name his great-aunt Doris gave to Chad. It’s also his graffiti tag. Tsa Nish, Mr. Moon, is a key figure in the Caddo creation story.

“After college I didn’t make any artwork at all and just did graphic design for
six or more years,” says Chad. “I really wanted to express myself artistically and be more creative in everything that I did. I just started doing art again one day, and along the same time period, my brother Chase was beginning to create Caddo pottery the old way.” Chad learned more about Caddo visuals through his brother, who was conducting extensive research to help revive the Caddo pottery tradition. The last Caddo pottery made before Jeri Redcorn (Caddo-Potawatomi) initiated its revival in the 1990s was by the Whitebead family and Madeline Hamilton’s grandmother around 1930.

Chad has plunged feet first into the Native art world. For his first art show, he shared a booth with his brother at the 2014 Santa Fe Indian Market. He has also exhibited at the Cherokee Art Market and the Chickasaw Nation’s Southeastern Art Show and Market, and has many more markets earmarked for the future, including a return to Santa Fe Indian Market.