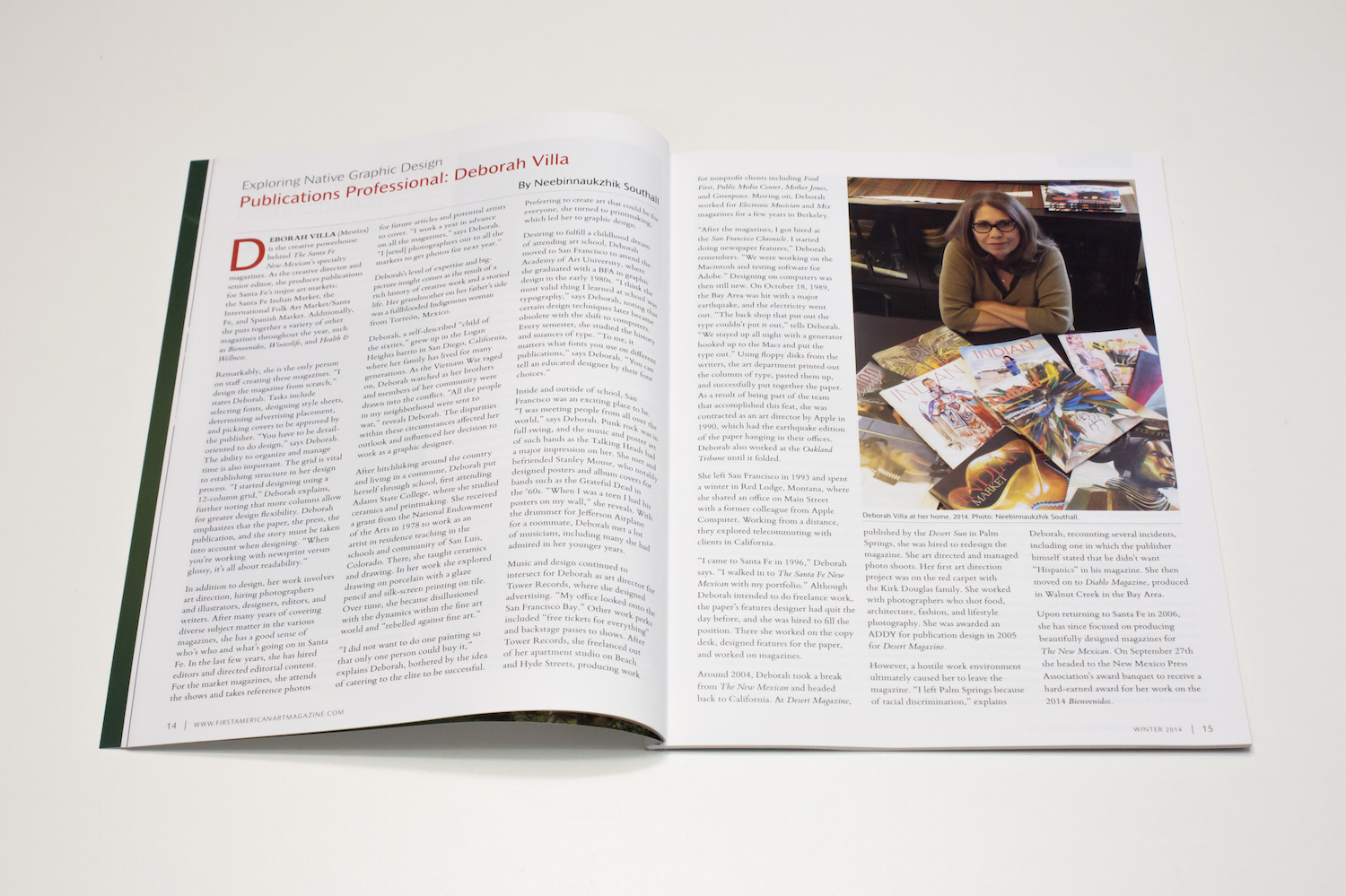 DEBORAH VILLA (Mestiza) is the creative powerhouse behind The Santa Fe
New Mexican’s specialty magazines. As the creative director and senior editor, she produces publications for Santa Fe’s major art markets: the Santa Fe Indian Market, the International Folk Art Market/Santa Fe, and Spanish Market. Additionally, she puts together a variety of other magazines throughout the year, such as Bienvenidos, Winterlife, and Health & Wellness.

Remarkably, she is the only person on staff creating these magazines. “I design the magazine from scratch,” states Deborah. Tasks include selecting fonts, designing style sheets, determining advertising placement, and picking covers to be approved by the publisher. “You have to be detail- oriented to do design,” says Deborah. The ability to organize and manage time is also important. The grid is vital to establishing structure in her design process. “I started designing using a 12-column grid,” Deborah explains, further noting that more columns allow for greater design flexibility. Deborah emphasizes that the paper, the press, the publication, and the story must be taken into account when designing. “When you’re working with newsprint versus glossy, it’s all about readability.”

In addition to design, her work involves art direction, hiring photographers and illustrators, designers, editors, and writers. After many years of covering diverse subject matter in the various magazines, she has a good sense of who’s who and what’s going on in Santa Fe. In the last few years, she has hired editors and directed editorial content. For the market magazines, she attends the shows and takes reference photos for future articles and potential artists to cover. “I work a year in advance on all the magazines,” says Deborah. “I [send] photographers out to all the markets to get photos for next year.”

Deborah’s level of expertise and big-picture insight comes as the result of a rich history of creative work and a storied life. Her grandmother on her father’s side was a fullblooded Indigenous woman from Torreón, Mexico.

Deborah, a self-described “child of the sixties,” grew up in the Logan Heights barrio in San Diego, California, where her family has lived for many generations. As the Vietnam War raged on, Deborah watched as her brothers and members of her community were drawn into the conflict. “All the people in my neighborhood were sent to war,” reveals Deborah. The disparities within these circumstances affected her outlook and influenced her decision to work as a graphic designer.

After hitchhiking around the country and living in a commune, Deborah put herself through school, first attending Adams State College, where she studied ceramics and printmaking. She received a grant from the National Endowment of the Arts in 1978 to work as an artist in residence teaching in the schools and community of San Luis, Colorado. There, she taught ceramics and drawing. In her work she explored drawing on porcelain with a glaze pencil and silk-screen printing on tile. Over time, she became disillusioned with the dynamics within the fine art world and “rebelled against fine art.”

“I did not want to do one painting so that only one person could buy it,” explains Deborah, bothered by the idea of catering to the elite to be successful. Preferring to create art that could be for everyone, she turned to printmaking, which led her to graphic design.

Desiring to fulfill a childhood dream of attending art school, Deborah moved to San Francisco to attend the Academy of Art University, where she graduated with a BFA in graphic design in the early 1980s. “I think the most valid thing I learned at school was typography,” says Deborah, noting that certain design techniques later became obsolete with the shift to computers. Every semester, she studied the history and nuances of type. “To me, it matters what fonts you use on different publications,” says Deborah. “You can tell an educated designer by their font choices.”

Inside and outside of school, San Francisco was an exciting place to be. “I was meeting people from all over the world,” says Deborah. Punk rock was in full swing, and the music and poster art of such bands as the Talking Heads had a major impression on her. She met and befriended Stanley Mouse, who notably designed posters and album covers for bands such as the Grateful Dead in the ‘60s. “When I was a teen I had his posters on my wall,” she reveals. With the drummer for Jefferson Airplane for a roommate, Deborah met a lot of musicians, including many she had admired in her younger years.

Music and design continued to intersect for Deborah as art director for Tower Records, where she designed advertising. “My office looked onto the San Francisco Bay.” Other work perks included “free tickets for everything” and backstage passes to shows. After Tower Records, she freelanced out of her apartment studio on Beach and Hyde Streets, producing work for nonprofit clients including Food First, Public Media Center, Mother Jones, and Greenpeace. Moving on, Deborah worked for Electronic Musician and Mix magazines for a few years in Berkeley.

“After the magazines, I got hired at the San Francisco Chronicle. I started doing newspaper features,” Deborah remembers. “We were working on the Macintosh and testing software for Adobe.” Designing on computers was then still new. On October 18, 1989, the Bay Area was hit with a major earthquake, and the electricity went out. “The back shop that put out the type couldn’t put it out,” tells Deborah. “We stayed up all night with a generator hooked up to the Macs and put the type out.” Using floppy disks from the writers, the art department printed out the columns of type, pasted them up, and successfully put together the paper. As a result of being part of the team that accomplished this feat, she was contracted as an art director by Apple in 1990, which had the earthquake edition of the paper hanging in their offices. Deborah also worked at the Oakland Tribune until it folded.

She left San Francisco in 1993 and spent a winter in Red Lodge, Montana, where she shared an office on Main Street with a former colleague from Apple Computer. Working from a distance, they explored telecommuting with clients in California.

“I came to Santa Fe in 1996,” Deborah says. “I walked in to The Santa Fe New Mexican with my portfolio.” Although Deborah intended to do freelance work, the paper’s features designer had quit the day before, and she was hired to fill the position. There she worked on the copy desk, designed features for the paper, and worked on magazines.

Around 2004, Deborah took a break from The New Mexican and headed back to California. At Desert Magazine, published by the Desert Sun in Palm Springs, she was hired to redesign the magazine. She art directed and managed photo shoots. Her first art direction project was on the red carpet with the Kirk Douglas family. She worked with photographers who shot food, architecture, fashion, and lifestyle photography. She was awarded an ADDY for publication design in 2005 for Desert Magazine.

However, a hostile work environment ultimately caused her to leave the magazine. “I left Palm Springs because of racial discrimination,” explains Deborah, recounting several incidents, including one in which the publisher himself stated that he didn’t want “Hispanics” in his magazine. She then moved on to Diablo Magazine, produced in Walnut Creek in the Bay Area.

Upon returning to Santa Fe in 2006, she has since focused on producing beautifully designed magazines for The New Mexican. On September 27th she headed to the New Mexico Press Association’s award banquet to receive a hard-earned award for her work on the 2014 Bienvenidos.

View all of Neebinnaukzhik's posts.