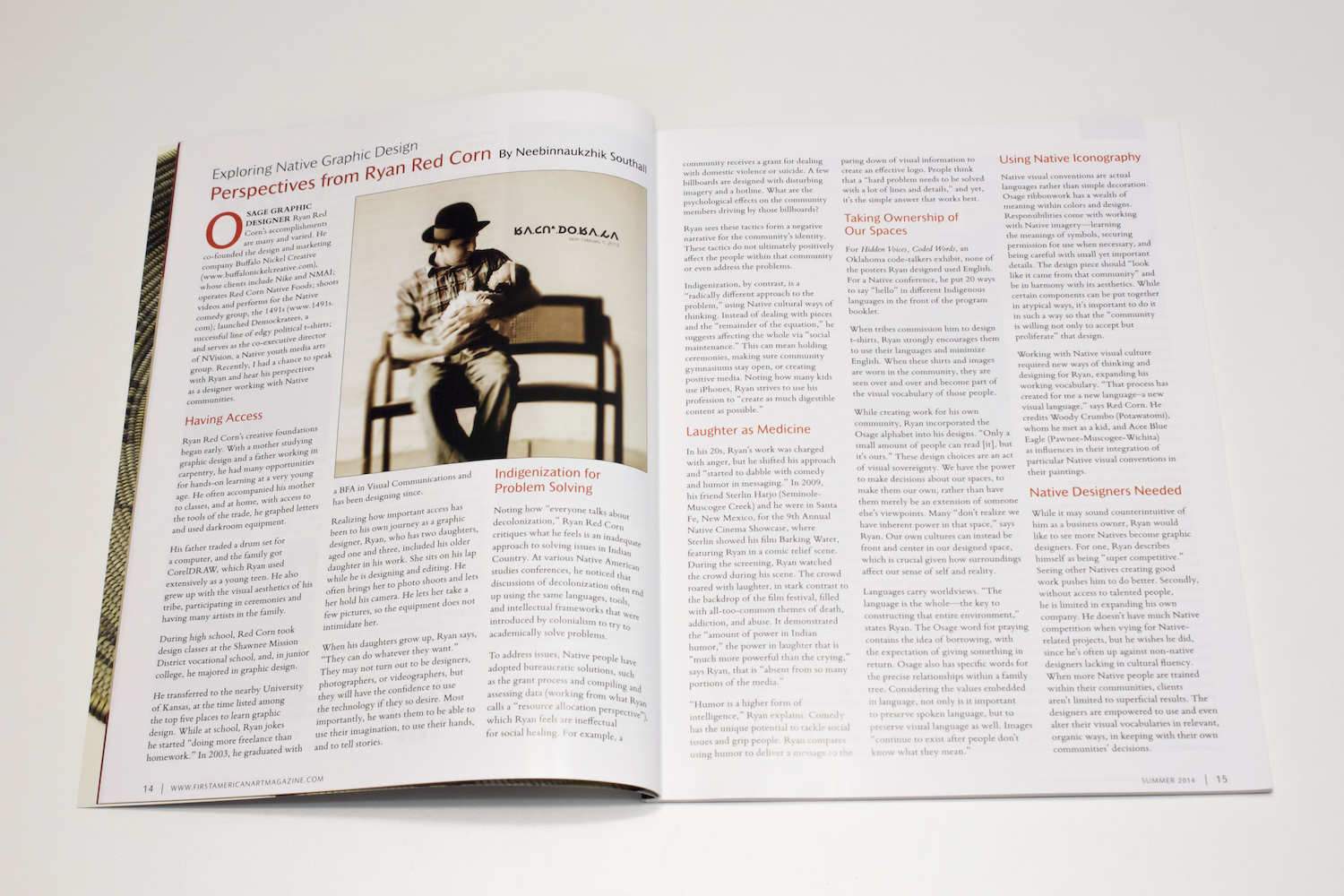 OSAGE GRAPHIC DESIGNER Ryan Red Corn’s accomplishments are many and varied. He co-founded the design and marketing company Buffalo Nickel Creative (www.buffalonickelcreative.com), whose clients include Nike and NMAI; operates Red Corn Native Foods; shoots videos and performs for the Native comedy group, the 1491s (www.1491s.com); launched Demockratees, a successful line of edgy political t-shirts; and serves as the co-executive director of NVision, a Native youth media arts group. Recently, I had a chance to speak with Ryan and hear his perspectives as a designer working with Native communities.

Ryan Red Corn’s creative foundations began early. With a mother studying graphic design and a father working in carpentry, he had many opportunities for hands-on learning at a very young age. He often accompanied his mother to classes, and at home, with access to the tools of the trade, he graphed letters and used darkroom equipment.

His father traded a drum set for a computer, and the family got CorelDRAW, which Ryan used extensively as a young teen. He also grew up with the visual aesthetics of his tribe, participating in ceremonies and having many artists in the family.

He transferred to the nearby University of Kansas, at the time listed among the top five places to learn graphic design. While at school, Ryan jokes he started “doing more freelance than homework.” In 2003, he graduated with a BFA in Visual Communications and has been designing since.

Realizing how important access has been to his own journey as a graphic designer, Ryan, who has two daughters, aged one and three, included his older daughter in his work. She sits on his lap while he is designing and editing. He often brings her to photo shoots and lets her hold his camera. He lets her take a few pictures, so the equipment does not intimidate her.

When his daughters grow up, Ryan says, “They can do whatever they want.” They may not turn out to be designers, photographers, or videographers, but they will have the confidence to use the technology if they so desire. Most importantly, he wants them to be able to use their imagination, to use their hands, and to tell stories.

Noting how “everyone talks about decolonization,” Ryan Red Corn critiques what he feels is an inadequate approach to solving issues in Indian Country. At various Native American studies conferences, he noticed that discussions of decolonization often end up using the same languages, tools, and intellectual frameworks that were introduced by colonialism to try to academically solve problems.

To address issues, Native people have adopted bureaucratic solutions, such
as the grant process and compiling and assessing data (working from what Ryan calls a “resource allocation perspective”), which Ryan feels are ineffectual for social healing. For example, a community receives a grant for dealing with domestic violence or suicide. A few billboards are designed with disturbing imagery and a hotline. What are the psychological effects on the community members driving by those billboards?

Ryan sees these tactics form a negative narrative for the community’s identity. These tactics do not ultimately positively affect the people within that community or even address the problems.

Indigenization, by contrast, is a “radically different approach to the problem,” using Native cultural ways of thinking. Instead of dealing with pieces and the “remainder of the equation,” he suggests affecting the whole via “social maintenance.” This can mean holding ceremonies, making sure community gymnasiums stay open, or creating positive media. Noting how many kids use iPhones, Ryan strives to use his profession to “create as much digestible content as possible.”

In his 20s, Ryan’s work was charged with anger, but he shifted his approach and “started to dabble with comedy and humor in messaging.” In 2009, his friend Sterlin Harjo (Seminole- Muscogee Creek) and he were in Santa Fe, New Mexico, for the 9th Annual Native Cinema Showcase, where Sterlin showed his film Barking Water, featuring Ryan in a comic relief scene. During the screening, Ryan watched the crowd during his scene. The crowd roared with laughter, in stark contrast to the backdrop of the film festival, filled with all-too-common themes of death, addiction, and abuse. It demonstrated the “amount of power in Indian humor,” the power in laughter that is “much more powerful than the crying,” says Ryan, that is “absent from so many portions of the media.”

“Humor is a higher form of intelligence,” Ryan explains. Comedy has the unique potential to tackle social issues and grip people. Ryan compares using humor to deliver a message to the paring down of visual information to create an effective logo. People think that a “hard problem needs to be solved with a lot of lines and details,” and yet, it’s the simple answer that works best.

Taking Ownership of Our Spaces

For Hidden Voices, Coded Words, an Oklahoma code-talkers exhibit, none of the posters Ryan designed used English. For a Native conference, he put 20 ways to say “hello” in different Indigenous languages in the front of the program booklet.

When tribes commission him to design t-shirts, Ryan strongly encourages them to use their languages and minimize English. When these shirts and images are worn in the community, they are seen over and over and become part of the visual vocabulary of those people.

While creating work for his own community, Ryan incorporated the Osage alphabet into his designs. “Only a small amount of people can read [it], but it’s ours.” These design choices are an act of visual sovereignty. We have the power to make decisions about our spaces, to make them our own, rather than have them merely be an extension of someone else’s viewpoints. Many “don’t realize we have inherent power in that space,” says Ryan. Our own cultures can instead be front and center in our designed space, which is crucial given how surroundings affect our sense of self and reality.

Languages carry worldviews. “The language is the whole—the key to constructing that entire environment,” states Ryan. The Osage word for praying contains the idea of borrowing, with the expectation of giving something in return. Osage also has specific words for the precise relationships within a family tree. Considering the values embedded in language, not only is it important to preserve spoken language, but to preserve visual language as well. Images “continue to exist after people don’t know what they mean.”

Native visual conventions are actual languages rather than simple decoration. Osage ribbonwork has a wealth of meaning within colors and designs. Responsibilities come with working with Native imagery—learning the meanings of symbols, securing permission for use when necessary, and being careful with small yet important details. The design piece should “look like it came from that community” and be in harmony with its aesthetics. While certain components can be put together in atypical ways, it’s important to do it in such a way so that the “community is willing not only to accept but proliferate” that design.

Working with Native visual culture required new ways of thinking and designing for Ryan, expanding his working vocabulary. “That process has created for me a new language–a new visual language,” says Red Corn. He credits Woody Crumbo (Potawatomi), whom he met as a kid, and Acee Blue Eagle (Pawnee-Muscogee-Wichita) as influences in their integration of particular Native visual conventions in their paintings.

While it may sound counterintuitive of him as a business owner, Ryan would like to see more Natives become graphic designers. For one, Ryan describes himself as being “super competitive.” Seeing other Natives creating good work pushes him to do better. Secondly, without access to talented people, he is limited in expanding his own company. He doesn’t have much Native competition when vying for Native- related projects, but he wishes he did, since he’s often up against non-native designers lacking in cultural fluency. When more Native people are trained within their communities, clients aren’t limited to superficial results. The designers are empowered to use and even alter their visual vocabularies in relevant, organic ways, in keeping with their own communities’ decisions.